Many of the key concerns over the outlook for UK economic policy have been eased over the past week. Concerns over Bank of England independence and of the possibility of monetary policy being focussed on the GBP or imported inflation have all eased. The conditions have been laid for a breaking of the recent negative correlation between GBP weakness and Gilt yields. However, concerns have grown that the government will prove insufficiently ambitious with respect to fiscal expansion, which adds to our concern that the BoE is over-stating the outlook for economic growth into 2017. Further monetary expansion into H1 2017 appears likely. While there are some significant potential pot-holes for the global economy to traverse, most notably the forthcoming US Presidential election, it is time to start looking for opportunities to scale into long-Gilt position by building-up DV01 to the target level into weakness. From a medium-term perspective  Gilt yields have yet to reach their cycle low.

The return of clarity

It has been a period of clarity for the conduct of UK monetary policy. The net result has been to reinforce our core assumptions:

Threats to the BoE’s independence were raised…

One of the critical areas of clarity concerned the independence of the BOE. A series of government comments had questioned the efficacy of an independent Bank and argued both for a greater political control of monetary policy and – rather surreally – for the beneficial effects of a tighter monetary policy. These comments were a particularly unpalatable combination for Gilts. We viewed an ending of these threats to BoE independence as a necessary condition for a recovery in Gilts.

…and put down (now the short- to medium-term at least)

It was with some relief, therefore, that clarity emerged on this point. PM Theresa May stressed her confidence in BoE Governor Carney who in turn clarified his departure date, agreeing to stay on for an additional year to 2019 and hence over-see the process of Brexit. While an optimum outcome would have been Carney serving his full 8-yr term as Governor, by agreeing to a 6-yr term rather than the 5 he had originally pledged, there is now medium-term clarity over monetary policy. (Although if the current government’s somewhat loose relationship with economic rationality persists, then the build-up to Carney’s replacement could be an “interesting” time for markets.) 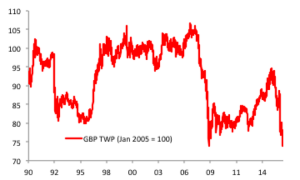 A second area of clarity referred to the GBP. There has been growing speculation that the BoE will need to focus monetary policy on stabilising the currency. This always seemed a strange concept, and the BoE reiterated that it would focus on domestic economic imperatives. There are many reasons why it was always improbable that the BoE targets GBP, but chief among them are:

That the BoE will not target the GBP should have been so obvious as to be assumed, but unfortunately recent weeks have seen an escalation of market speculation on such a topic.

On a related point, the BoE confirmed how they would be tolerant of a period of above target inflation as long as this is driven by imported price trends and does not have a domestic driver. This is a crucial point. The impact of higher import prices will in the first instance be a suppression of real disposable income growth and hence be negative for economic growth. This is a matter for monetary policy only if increased import prices spark a domestic economic momentum, which could entail workers demanding and obtaining higher wages and/ or elevated inflation expectations feeding through into broader product prices.

Second round inflation effects in the UK would be very unlikely

However, in the UK this is extremely unlikely. Despite an exceptionally strong labour market recovery, UK wage growth remains anaemic and with growth set to soften and unemployment rise it is difficult to see labour having sufficient pricing power to obtain nominal wage gains that can offset the import price squeeze. Indeed, the lack of a second round effect explains why periods of imported price shocks in G10 economies over the past decade have tended to follow a familiar pattern: a period of surging headline inflation; muted core inflation; a sharp disinflation if not deflation as base effects kicking-in due to the lack of a notable second round inflation effects.

Chart 2. Wage growth has been resistant to the strong recovery in the labour market post-crisis 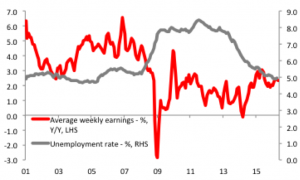 In fact the inflation profile outlined in the BoE’s inflation report appears highly unrealistic. The BOE assumes above target inflation throughout it’s 3-yr forecast period, with the CPI expected to rise from 1.0% currently to 2.7% in both 2017 and 2018 and measure 2.5% in 2019. The 2017 forecast could prove to be overly optimistic given the scale to which the GBP TWI has slumped (14.5% since the Brexit vote) and the extent to which this will push headline inflation higher. A CPI peaking closer to 3.5% in 2017 appears more likely, especially considering that we expect renewed GBP weakness. However, the lack of second round inflation effects and an expected notable slowdown in economic growth makes us believe that the 2018 and particularly the 2019 inflation forecast may prove too high as a stabilisation of the GBP – and currencies tend to have front-loaded slumps in the face of economic shocks – would see base effects have a disinflationary impulse.

In terms of the outlook for monetary policy, the BoE removed it’s previous guidance that it would likely reduce it’s base rate towards it’s effective zero bound of close to but slightly above zero. This reflected the recovery in economic activity from August – itself helped by the BoE’s raft of monetary easing measures, which acted as a circuit breaker in terms of adverse market sentiment. Q3 real GDP growth was 0.5% vs. the BoE’s assumption of 0.1% and the bank has revised higher it’s GDP growth forecast for 2016 (2.2% from 2,0%) and 2017 (1.4% vs. 0.8%). This still represents toe BoE forecasting a notable deceleration of growth and it lowered its 2018 GDP forecast to 1.5% form 1,8%. However, this outcome still appears too optimistic.

Our assumption has been that without offsetting policy stimulus, the impact of Brexit would be a 3pp swing in GDP growth over the subsequent 12-18 months, from ~2% to -1%. The BoE’s raft of easing measures (chief amongst which was a 3.2% of GDP expansion of QE) helped reduce left-tail risk to economic growth, but more stimulus is still needed. Corporate investment, already weak prior to Brexit, is expected to slow further while households are set to face a notable real disposable income squeeze and are poorly prepared to withstand the coming Brexit shock given that they have ben dis-saving at a pace last seen prior to the GFC and given that household credit growth has been brisk. A rise in household savings ratios are a key risk. (The Gilt sell-off, mounting UK economic risks and an inflation scare that rhymes). The problem could be eased if the government were to unveil a fiscal expansion in it’s forthcoming autumn statement, but the government’s ambitions appear to have winnowed. Chancellor Hammond has spoken of an infrastructure spending in the low single digits of bullions. A GBP5bn fiscal package would amount to just 0.3% of GDP, which is far lower than the 2% of GDP package we believe is necessary. The lack of fiscal support will increase the downside risks to growth and by extension retain the over-reliance on monetary stimulus. While the BoE has a neutral policy outlook, we expect economic under-performance to require further monetary easing over the coming 6 months. This will entail reducing the policy rate to the effective zero bound and expanding QE once more.

This policy outlook reinforces our view that many of the drivers of the Gilt weakness will not persist:

Chart 3. The recent sell-off in Gilts is a trend interruption not reversal 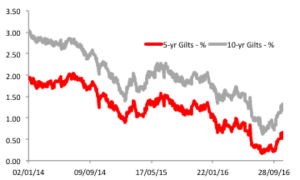 When combined with the comfort we have in terms of the flow of funds into Gilts as we outlined in our recent note, then the medium-term outlook for the asset remains robust. (The Gilt sell-off, mounting UK economic risks and an inflation scare that rhymes). We would be reluctant to re-establish bullish Gilt positions in full size over the near-term given our expectations for renewed weakness in GBP which could reignite renewed concerns over inflation trends requiring higher yields. In addition, there is the potential event risk of the US Presidential election to traverse. However, we would look to scale into long Gilt positions into market weakness and slowly build-up exposure to the desired DV01. After all, while it remains highly counter-consensus, we have not changes out medium-term forecast of 10yr Gilt wields falling below 0.5%.