The Bank of Japan delivered a new monetary regime following today’s policy meeting. Unfortunately, the switch to a yield and yield curve targeting framework will lessen the authorities’ ability to achieve their growth and inflation targets. The new regime is internally inconsistent, lacks a theoretical anchor and may compel an early tapering of QE. The new policy regime may provide a support to investors looking to buy-JGBs and receive JPY IRS in the 10-yr area of the curve as the BOJ tries to limit sell-offs and create a path to stable roll and carry returns. (The “old faithful” JPY IRS 7fwd 3yr is a “receive” into today’s policy decision.) However, in so doing the BOJ will slow the flow of liquidity into risk assets by allowing Japanese financial institutions to maintain their deflation-focussed portfolio mix. The new regime will also make it more difficult for the BOJ to prevent continued downside moves in USD/JPY over the coming months.

Our response to today’s Bank of Japan meeting might be compared to a child that asked for a Star Wars figure and received one of Jar Jar Binks. As with recent BOJ meetings, we went into this policy discussion with hope – but not high expectation – of a regime shift in the monetary policy framework, one where the Bank and government adopt a more forceful approach to supporting demand and price stability. The long hoped for switch to a greater coordination across reflationary levers, ideally via a variant of helicopter money, is at the top of the wish list. Today’s policy meeting did deliver a regime shift, but not the one we wanted. The new BOJ policy framework is internally inconsistent and may contain the seeds of it’s own failure.   The new framework increases the downside risks to USD/JPY.

Until now, Abenomics aimed to rid banks of a deflation portfolio bias

The BOJ’s policy framework during the Abnomics era had a theoretical under-pinning. Indeed, Abenomics in its entirety was the first time that true policy orthodoxy was being applied to Japan since the bursting of the bubble economy. The BOJ would expand the monetary base via an aggressive process of quantitative easing and in so doing shake the domestic financial sector out of its deflation focussed portfolio allocation which was heavily skewed towards JGBs. By absorbing a large portion of the float of JGBs, the BOJ would compel a wall of liquidity to flow into risk assets. A stronger performance of risk assets/ cheap risk capital allied to low yields would prove stimulative for growth. The scale of the BOJ’s QE can be seen by chart 1 which shows how JGBs fell from 19.5% of bank assets on the eve of Abenomics to 8.6% at present. Continued QE would push these holdings back towards more international norms of 4-5%. While many analysts lamented this as a problematic side effect of the BOJ’s QE program, it was in fact the deliberate transmission mechanism of monetary easing to the real economy.

Chart 1. JGBs as a portion of Japanese bank assets – % 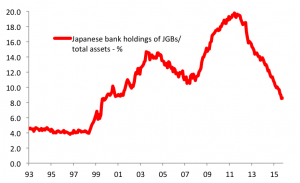 The second and third arrows of Abenomics remained in the quiver

The BOJ was doing its part in implementing the first arrow of Abenomics. The weak response of the economy was a consequence of the second and third arrows not being deployed. While it is commonly accepted that structural reform (the third arrow) has ben laggardly, fiscal expansion (second arrow) has actually not been implemented. Fiscal policy has been far too tight in Japan. The incorrect decision to press ahead with a consumption tax hike in April 2014 was particularly problematic as it has removed two years of economic momentum. As chart 2 shows, the level of real GDP remains below the pre-consumption tax hike high watermark. Moreover, rather than ruling out the second planned consumption tax hike until such time that deflation has been definitely averted, the government has merely pushed this back back for two years. A lack of fiscal expansion has sapped demand from the economy and reduced the effectiveness of the BOJ’s monetary expansion. 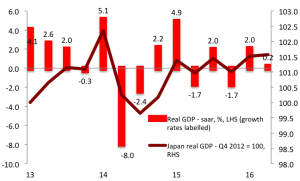 A switch to yield and yield curve targeting

An appropriate policy response would be to unleash the second arrow of Abnomics. Instead, the BOJ has unveiled a new monetary policy framework. It has switched to a yield and yield curve targeting framework, which will replace its previous target for expanding the monetary base. While the BOJ will maintain it’s negative interest rate policy (NIRP) and has signposted that further cuts may come, it will try to keep the curve steep with 10yr JGB yields, for instance measuring around current levels of 0%. One rationale behind the decision appears to be an attempt to provide a sop for the banking system and which has been faced with a compression of margins and a lack of carry and roll in their portfolios, a concept that has dominated their thinking for 20 years. (For seasoned practitioners of the JGB market, it is common to hear phrases such as “it’s a disaster for the banks as they have been underweight JGBs and missed out on a fortnight’s carry”).

The problems with the framework

The new policy framework, however, is riven with internal inconsistencies, which will undermine it’s effectiveness and which could compel the BOJ to taper.

No theoretical anchor. One of the obvious problems is that the BOJ’s monetary policy now no longer has a theoretical anchor. Previously the BOJ could focus on the portfolio rebalancing effect of low yields supporting economic activity, but in targeting higher long-term yields it has negated this reasoning. By providing a steeper yield curve to the banks the BOJ is reducing their incentive to push liquidity into more risk based markets. It will also slow the pace at which banks remove their deflation focussed portfolio mix, which remains unusually focussed on risk free assets.

An extreme form of financial repression comes with a price. A second, practical point is that the BOJ is providing a steeper curve to support the banks but by targeting yields is implementing an extreme form of financial repression that will further undermine market turnover and market making activity. If 10-year JGBs yields are around 0%, investors will buy and hold and ride the curve.

New framework could compel a BOJ taper. More importantly, the new policy framework could compel a BOJ taper. While there are growing concerns that the BOJ is running out of it’s capacity to purchase JGBs, this view mistakes the willingness rather than the ability of banks to sell bonds to the BOJ. As we noted above, Japanese financial institutions retain a deflation focussed portfolio mix that contains an internationally high focus on government bonds. If the BOJ were to bring risk free holdings for banks and lifers back towards more internationally normal levels then we estimate that there is a further JPY170trn of JGBs that the BOJ can buy. We are very far from the practical limitations of QE. However, banks will be increasingly reluctant sellers of JGBs to the BOJ as they are comfortable with a deflation portfolio. This means that on-going BOJ QE will have an increasingly convex impact on JGB prices as the sellers grow increasingly price sensitive. Under the previous monetary framework such a response was acceptable and would actually support economic growth as low yields compel a portfolio rebalancing effect. However, under a yield curve-targeting framework, such a convex policy effect would be problematic as it could flatten the curve. (A related dynamic is that if the BOJ lowers it’s policy rate and tries to keep 10yr yields around current levels, then banks and Lifers will be incentivised to bring money back into the JGB market rather than invest in risk assets due to their increased ability to generate returns by riding the steeper curve.) Therefore, by maintaining a steep curve, the BOJ may be compelled to notably scale-back the level of its QE. The first arrow of Abenomics may be put back in the quiver along with the second and third arrow.

These factors highlight our significant concerns with the latest BOJ policy decision. The new framework lacks a theoretical anchor and presages a lower level of policy expansion to come. Of course, it is possible that the authorities may yet combine the new yield curve framework with a variant of helicopter money, but the prognosis is not positive since today’s announcement implies a diminished scale of ambition.

For these reasons, the initial move higher in USD/JPY after the policy announcement does not appear sustainable. The new framework will make it more difficult to the authorities to achieve their economic goals and by providing a subsidy to financial institution holding a deflation focussed portfolio will limit the flow of liquidity into risk and overseas assets. Over the coming weeks and months, the BOJ may have to contend with a USD/JPY moving below 100.

For longer-term interest rate markets, the new policy framework creates a more asymmetric risk profile for being long JGBs, particularly in the 10-yr part of the curve. The BOJ’s yield and curve targeting framework will provide a policy subsidy for long positions by limiting sell-offs, and allow investors to ride down the curve. Although the trade is rather unexciting as a carry and role trade, it might be time for investors focussed on Japan to receive “old faithful”, the JPY IRS 7fwd 3yr. This interest rate is the pivot point of the entire curve as it is sensitive to the 10yr JGB future (which is actually a 7yr instrument). Into sell-offs this yield provides initial support as futures tend to lead a selloff, which flattens the 7s10s slope component of this interest rate. With a lag, the JPY IRS 7fwd 3yr also becomes a higher beta play on a rate rally. The JPY IRS 7fwd 3yr is currently 35bp and has an annual slide of 9bp. We have liked receiving this interested since a year ago when it was 95bp and had a 15bp annual slide. This is an area of the yield curve that will likely receive heavy domestic receiving interest over the coming weeks. (Japan – a stir of echoes: of QQE3 and beyond.) However, the over-riding response to today’s announcement is one of disappointment as Japan’s long hoped for attempt to escape from deflation appears to be fading. 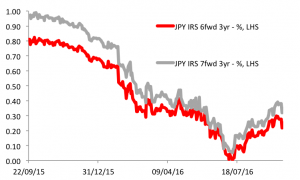