The Bank of England has more than made up for it’s surprise inaction last month as today’s policy announcement met our expectations for both a rate cut and the resumption of Quantitative Easing. While the GBP60bn expansion of QE was less than the GBP100bn we were expecting, the BOE over-delivered in other areas: it signposted a likely move to a near-ZIRP policy this year; it unveiled a new scheme to help the transmission of the policy rate cut to the real economy in a manner which will also ease the burden of lower interest rates on bank earnings; it announced a GBP10bn purchase scheme for corporate bonds. Following today’s announcements many of our existing market forecasts might appear conservative. While we still expect GBP/USD to head below 1.20, our 25bp target for 10y Gilt yields appears too high. Indeed, with Gilts expected to be increasing viewed as collateral rather than yield instruments over the coming quarters, the downside for Gilt yields is substantial. Our target for the GBP IRS 10fwd 10yr of 1.0% also looks conservative with 0.75% appearing more likely. However, from an economic growth perspective today’s announcements can only have a muted impact in offsetting what we expect to be a 3% Brexit effect on UK GDP growth. The baton now must pass to the government where we believe a 2% of GDP fiscal stimulus is urgently required.

Bank of England (BOE), you are more than forgiven for your surprise decision to delay easing monetary policy last month. The monetary response to Brexit delivered today was very much in line with what we had been expecting and hoping for. However, the surprise decision in July allied to the Bank of Japan’s inexplicably decision to implement a token ease (and hence impose a tightening on financial conditions on the economy as the JPY strengthened) naturally made us more nervous than we otherwise would have been heading into today’s meeting. Given the comments from Bank of England officials in recent weeks, it would have been a remarkable surprise had we not seen the 25bp rate that that was 100% priced-in. However, the risk to the markets was that this was all the BOE delivered. A 25bp cut alone could have spurred a mini-BOJ moment in GBP risk and risk-free assets.

Chart 1. The Brexit effect on UK GDP growth expected to see a swing from +2% to -1% absent any stimulus. 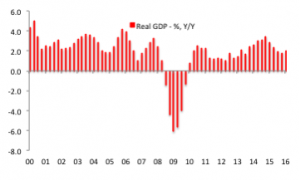 Our view remains clear. Over the next 12 months, Brexit will have a 3pp impact on UK GDP, moving us from a +2% growth path to -1%. The role of monetary and fiscal policy will be critical in offsetting this swing and given the non-linear risks to growth caused by the pervading uncertainty of the Brexit process, there is an urgent need for stimulus to be pre-emptive and swift. Into today’s meeting we were expecting a 25bp rate cut (to 0.25%) and for the bank to resume QE with a GBP100bn (5% of GDP) expansion of asset purchases spread across risk free and spread products.

By and large, the bank delivered on our expectations. The policy rate was lowered 25bp and the Bank signposted further easing as it noted that most Monetary Policy Committee (MPC) members expected the rate to fall close to the “effective lower bound” of “close to but a little above zero”. We have already noted that Brexit could result in the UK heading to a ZIRP or even negative interest rate regime. The BOE also implemented policies that could support the transmission mechanism of rate cuts to the real economy and at the same time limit the adverse impact that reduced net interest rate margins might have on the banking sector: it launched a Term Funding Scheme, which allows banks to fund themselves at interest rates close to the Bank rate.

In terms of QE, the Bank announced a GBP60bn (3% of GDP) expansion of Gilt purchases over the next 6 months, which would take the outstanding value of QE to GBP435bn. In addition, the Bank will purchase GBP10bn in corporate securities over the next 18 months, with the goal being that tighter spreads will encourage liquidity to flow into higher yielding assets (thereby further lowering funding costs for the corporate sector) or indeed for liquidity to flow more directly to the real economy in the form of loans.

The BOE is therefore maintaining it’s role as a critical source of stability and policy-leadership following the Brexit vote. The July pause can now be more accepted as a penalty kick miss that was followed up by a brace of goals in open play. However, from the perspective of UK economic growth, there is only so much that monetary policy can do The money multiplier effect on monetary easing is exceptionally low, and the 3.2% of GDP raft of QE could have an impact on GDP growth of less than 0.3pp. By contrast, the fiscal multiplier effects are far larger and the baton now has to pass to the government to implement the fiscal stimulus that the economy requires. The one encouraging aspect of the post-Brexit political realignment in the UK has been an apparent end to austerity as the critical policy anchor of the government. This leaves open the possibility of effective countercyclical fiscal stimulus. We continue to believe that a 2% of GDP fiscal stimulus is required, with the majority of this needing to be focussed on infrastructure spending plan. While there is talk of supporting consumer demand with a VAT cut, which would help, we would much rather the government issue consumption vouchers, which have an expiry date. This could ensure a marginal propensity to consume of this portion of the fiscal easing of close to unity.

Chart 2. This is no time for continued fiscal consolidation in the UK 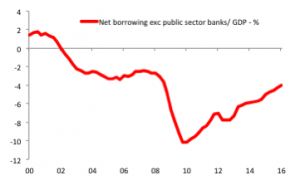 In terms of markets, our views are little changed although the fact that the BOE so clearly understands the non-linear economic risks adds further upside to many of our forecasts. In terms if Gilts, we had been expecting the 10yr yield to decline to 0.25% or flat with a lowered policy rate. The likelihood of further rate cuts now makes this forecast seem conservative. We would also reinforce our post-Brexit comment that Gilts could increasingly come to resemble Bunds in that they are viewed more as collateral instruments than yield products. We reiterate the potential for negatively yielding Gilts, and todays’ decisions by the BOE increase this possibility.

Chart 3. 10yr Gilts expected to converge to a falling policy rate: their growing role as a collateral product will lower the need for a term premium. 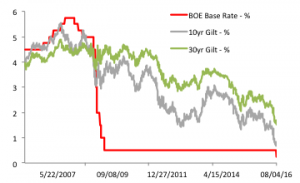 In terms of the longer-end of the curve, we have been recommending investors to receive the GBP IRS 10fwd 10yr targeting a move to 1.0%. Again, this seems conservative, and the increased upside to the 10yr part of the Gilt/ IRS curve, suggests that 75bp might be a more viable target for this instrument. 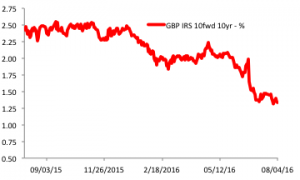 Meanwhile, ultra accommodative monetary policy that is associated with a limited multiplier effect remains a poor backdrop for the GBP, particularly with many investors casting a wary eye over the country’s wide current account deficit. While an aggressive fiscal stimulus package could result in a temporary bounce in GBP, the UK’s expected marked economic under-performance over the coming quarters provides little reason to question our view that GBP/USD will head below 1.20. 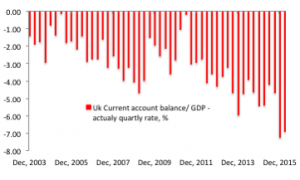 We have also noted that August needs to be a big month for policy stimulus or it will be a bad month for GBP risk assets. Fortunately the GBP delivered, which should help provide something of a tail wind to equity and, in particular, credit markets, at a time of acute economic risks.