Of excitement and regret

It is with decidedly mixed emotions that I report that Event Horizon Research will be tenderly and proverbially, covered in bubble wrap and placed in storage. EHR will no longer provide economic and market analysis, advice and strategy – either in written or verbal form. I would to thank our clients and readers. It has been a wonderfully enjoyable ride.

The reason for shuttering EHR is that I have decided to return to the buy-side. As excited as I am about the position I will accept and the organisation I will be joining, I still feel sadness at closing EHR. On one level, when you pour your energy into building a venture from the ground-up you come to think of your creation as somehow, organic. A second, and much more prosaic reason for my maudlin mood is the realisation that the balance of probabilities suggest that in my new institution, I will no longer have the option of deciding to work in my underpants.

Fig 1. A form of work attire that is unlikely to be maintained 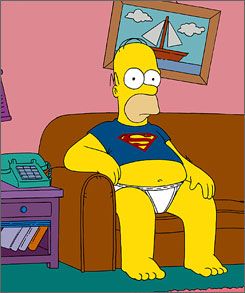 A third source of poignancy is that I will not be able to update the analytical narratives I had been building.

The sub-optimal policy response to the income-lite global recovery.

My concern is growing and my anger building at the sub-optimal global policy response to the income-lite global economic recovery. A focus by too many policy-makers on out-dated models of wage growth and inflation, models that fail to reflect a multi-faceted structural break post-GFC, risk embedding the global economy in a low inflation and low yield equilibrium. The Fed in particular is tightening policy based on a hope of inflation. This focus on the inflation chimera could be particularly alarming come the next growth downturn. Policy-makers are spurning a multi-decade opportunity to run their economies white hot in an effort to try and raise inflation expectations, reduce under-employment, expand participation rates and alter the actual path of wage growth.

The structural downdraft on wages and inflation.

The structural factors that have undermined the efficacy of wage and inflation models are growing in prevalence: the pricing power of labour continues to erode as a consequence of variables such as technology change, increasing income inequality (which reduces the relevance of data that looks at average wage and income growth and at aggregate measures of wealth); in selected countries the rising burden of student debt; the global productivity shock – which is failing to slow the growth of corporate profits since the reduced pricing power of labour means that unit labour costs can be restrained by keeping wages and compensation low. It’s a great time to be an employer but a not so great time to be an employee.

Figure 2. It’s a great time to be an employer 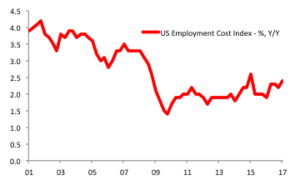 Brexit and a multi-faceted definition of disaster.

Where to begin discussing the potential multi-generational economic, social, political and geopolitical disaster than is Brexit:

One would hope that the UK has a moment of collective and belated lucidity and realises that when one partakes in an argument of ideas, one would rather not be on the same side as the Brietbart Empire and its environs, the Murdoch media empire, the foreign policy agenda of Vladimir Putin and the extreme right wing economic views from the margins…

Trump – maybe we should have played the man, not the ball.

When Trump won the election I said it was important to play the ball not the man and focus on the policy agenda. Soon after coming to power it became clear that the nature of the man rendered most aspects of his policy agenda as, to quote a favoured bard, “writ in water”. Hence the swam-dive of the Trump-trade and in particular the expectations of a stronger USD.

Figure 3. A full implementation of Trump’s economic agenda was worth ~100bp to the US neutral rate. But so little is likely to now be enacted… 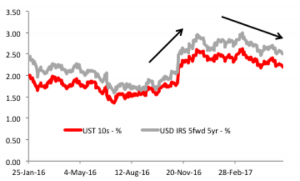 The reshaping of the body politic.

Despite my grim deflation strewn medium-term economic outlook, a greater concern to be me is a question I am unable to answer: what happens next in those countries that have embraced populism? The UK and the US saw voters respond to the global income crisis by voting for the optically anti-systemic solution of Trump and Brexit. However, in both cases the result will likely be a marked deterioration in the incomes and outlook for the very voters who looked for change. At least in the US, the dysfunctional nature of the Trump presidency and the checks and balances to executive power are limiting his capacity to enact many of the policies that the GOP has targeted, such as the planned use of healthcare reform to fund large-scale regressive tax cuts. But in the case of Brexit, with so many of the leading backers of Brexit cleaving towards extreme right wing economic views – individuals from the margins of political and economic life have been thrust into positions of central influence – checks and balances have been lacking. The Prime Minister’s success criteria seems to be simply to remain in office, and she seems to believe that the best way to do so is to have adopt the ideological platform and goals of the extreme pro-Brexit wing of her party.

What happens if the electorates feel betrayed? Does the electorate double down on more populist rhetoric? Do they embrace an even more hard-right agenda (i.e., truly turn the UK into “Singapore-on-Thames”, and already leading Brexiteers have been repeating the mantra that UK workers are too coddled with too many labour rights and that a lack of application and work ethic explains the productivity crisis). Alternatively, do electorates try a hard left agenda, such as the agenda of Jeremy Corbyn, the leader of the UK opposition party or a Bernie Sanders type movement in the US? (In terms of Corbyn, while the global income crisis requires a reduced focus on austerity and requires policies that could support wages, there is a clear danger in electing as Prime Minister an individual who is unaware that the economic costs of Brexit would likely torpedo his plans for fiscal expansion.) I truly don’t know the answer, but unless the fractured and weakened political centre can regroup and provide the intellectual and emotional leadership that is so clearly required, the political and economic denouement of the embrace of populism could be particularly painful.

Finally, one of my most consistently expressed strategic views is a belief that falling neutral policy rates, slower potential GDP growth and a continued weakness in wage and income growth across many developed economies will keep bond yields low. In short, do not fear duration. I have held so many conversations with people believing that the UST market – for instance – is a bubble and duration risk needs to be minimised at all costs. However, this viewpoint ignores that the Fed’s neutral policy rate has collapsed from 4.25% pre-GFC to around 1.75-2.0% at present. Given that longer-term yields are biased towards neutral rates +/- a term premium, I continue to view levels around 2.25% as appropriate for UST 10s: UST. By the same token, however, that the neutral rate is low so means that the monetary policy “bites” far sooner than it did in the past, which raises the spectre of a Fed policy error were it to try to raise rates at a ace consistent with it’s dot plot. If the Fed keeps hiking, watch that curve flatten…

Figure 4: USTs are not a bubble. They simply reflect the lower neutral Fed Funds rate. 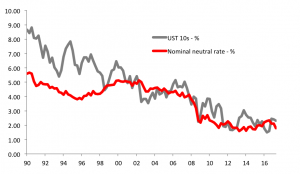 Once again, thank you all for your readership and support and I wish each and everyone one of you the very best of success and happiness.