As for generals, so for central bankers: sometimes, good fortune can be the most beneficial of virtues. The market reaction to Trump’s victory and his reflationary policy stance has meant that the Bank of Japan’s recently changed monetary framework has emerged as an accelerant to JPY weakness and has enhanced domestic monetary reflation expectations. The new yield curve-targeting framework is inherently pro-cyclical. With the BOJ’s yield cap set to accelerate JPY liquidity creation and widen the USD-JPY yield differential, USD/JPY is likely to remain a higher beta G10 component of the trend of broad-USD strength. The current uptrend in USD/JPY may have much further to run, with a return to the 120-levels likely over the coming months. However, high beta properties cut both ways. The pro-cyclicality of the new policy framework could accelerate JPY strength were global reflation hopes to fade or risk appetite diminish. This reflects how the BOJ’s policy framework essentially rewards Japanese financial institutions that adopt a traditional, deflation focussed and JGB heavy portfolio allocation. As such, while we see continued upside potential for USD/JPY over the coming months, investors could consider investing part of their profits of the short-JPY trade in downside protection. Meanwhile, on moves above 115 we would consider rotating USD-longs more fully towards the EUR or continued short-exposure to emerging market currencies, particular those in Asia.

The BOJ’s September policy meeting delivered what was, at the time, a deeply disappointing policy change. The laggardly and deflation-ridden Japanese economy required a further monetary stimulus. Instead, the BOJ unveiled a new policy framework that appeared more of an effort to appease banking sector criticisms of negative interest rates than it was to support growth. The BOJ announced a new monetary anchor. Rather than simply targeting a JPY80trn a year expansion of the monetary base via a policy of QQE, the BOJ would target the yield curve. It would continue to set a target for it’s call rate (-0.1%) but would also create a cap on 10yr JGB yields (0%). This policy was a way to keep the yield curve steep and, by providing a source of traditional revenue to Japanese banks (riding the yield curve) would offset a key adverse consequence of NIRP, notably how it eroded bank earning The BOJ’s would also target an expansion of the monetary base “more or less in line” with the previous JPY80trn annual pace of expansion. (The BOJ’s new policy framework and Jar Jar Binks.)

…has the good fortune of being a reflationary accelerant in Japan

For reasons external to Japan, the new policy framework has become more stimulatory to the economy and comprised an accelerant of JPY weakness. At the time we noted that yield curve targeting could be highly positive for the economy and negative for the JPY were PM Abe’s government to launch a wave of fiscal stimulus and increased issuance, which could require the BOJ to expand money supply to prevent yields from rising. However, we doubted the government’s commitment to reverse its overly restrictive fiscal stance. Instead, the path to stimulus has come from external events. The BOJ’s policy switch took place at a time when global bond markets had been weakening, and since Trump’s victory the decline has accelerated as the market has focussed on the reflationary aspects of his economic policy pledges. (Trumponomics – What if President-elect Trump does not pivot economically to the centre?) JGBs have weakened in response to this slide on G10 bond yields. This has seen the JGB curve steepen and 10yr yields rise above the BOJ’s 0% cap. They currently measure 2bp. This has raised expectations of the BOJ having to accelerate the pace of it’s JGB purchases in order to maintain it’s new monetary anchor, thereby accelerating the infusion of fresh liquidity into the economy. Potentially, the BOJ’s capacity to inject liquidity into yhe economy under the yield curve-targeting regime would be limited only by the availability of investors wiling to sell JGBs. (In this sense, the BOJ’s yield curve targeting does not quite offer the unlimited capacity to intervene that the SNB’s 1.20 EUR/CNF floor did, but it remains sizable given that JGBs are the world’s largest bond market.) This, combined with a widening spread of USD-yields to JPY yields (the 2yr UST/JGB yield spread has risen to 125bp from 102bp at the time of the 21st September BOJ meeting) has supported an acceleration of USD/JPY into the current phase of USD-strength.

Chart 1. The global bond sell-off bailed the BOJ out of a bind and helped avert a policy taper

The pro-cyclicality of the BOJ’s new framework reflects its sensitivity to the level of JGB yields. The recent rise in JGBs has provided the BOJ with plenty of leeway in which to expand it’s asset purchases. 10yr JGB yields are currently positive while the curve is steep with the 2s10s spread, for instance, currently at 18bp. The BOJ could, should it wish, drive JGB yields notably lower before the negative carry on holding JGBs offset the positive slide that could be obtained via a steep curve. In contrast, a repeat of the situation in the JGB market in July and August would have left the BOJ with far less room for manoeuvre: on July 27th, for instance, 10yr JGB yields measured -29bp and the 2s10s slope was just 7bp, implying that the revenue to be gained from sliding down the yield curve struggled to offset the negative carry of holding JGBs; under these circumstances, were the BOJ to be following it’s current yield curve targeting regime, it could only BOJ expand its JGB buying were it to steepen the curve further by cutting short rates. In the current climate it is possible that the USD/JPY uptrend extends towards the 120 levels, which have provided something of a bound on Abenomics-related JPY weakness. 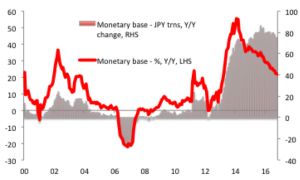 A Clinton win could have reversed the current dynamic

Had trump not won the Presidential election that the external circumstances would have been far less favourable. A Clinton victory would have largely represented a continuity of a policy mix of overly tight fiscal policy, overly tight financial sector regulatory policies and a Fed that was determined to hike. This would have rendered USTs a buy and would have kept US/ global growth and inflation expectations grounded. As Napoleon said of his Generals, good fortune is a property that can be as valuable as ability.

However, while the BOJ’s current policy-mix makes USD/JPY a high beta G10 currency in terms of USD strength, it is important to remember the inconsistencies of the current policy framework. After all, high beta qualities cut both ways. This is an important consideration given that for all of the resurgent US growth and inflation expectations the global economy remains in a fragile state:

A risk asymmetry that rewards a deflationary portfolio

The pro-cyclicality of the BOJ’s new policy framework could exaggerate the JPY-impact of a period of risk aversion that would drive JGB yields lower. As noted above, lower yields could limit the pace at which the BOJ could inject liquidity into the economy. Moreover, the new framework could hasten this policy dilemma since it rewards Japanese financial institutions that hold a deflationary, JGB heavy portfolio and could inflate demand for JGBs. The BOJ is effectively guaranteeing that the JGB curve stays steep enough that the positive slide from holding JGBs outweighs the potential negative carry were JGB yields to again be negative. This provides a comforting and familiar source of income for Japanese financial intuitions as they buy JGBs and ride the curve.

Chart 3. The BOJ’s QQE program has pushed the private sector out of JGBs 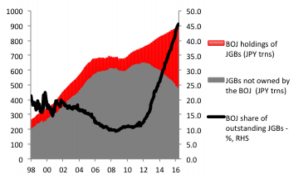 A reversal of the prior push of liquidity into risk assets

This risk asymmetry contrasts with the policies that defined the previous era of Abenomics. Then, the authorities were determined to push liquidity into risk bearing assets by requiring financial institutions to reduce their JGB holdings. As a consequence of its QQE policy, the BOJ’s ownership of outstanding JGBs has risen from 14.5% in November 2012 (on the eve of PM Abe’s election victory) to 46.4% in October. (Chart 3.) The flip side of this trend has been a decline in Japanese bank holdings of JGBs from 18.7% of their total assets to 8.4% over this period. (Chart 4.) 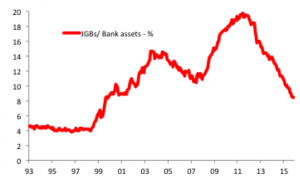 Weak growth has limited the resurgence in demand for risk assets

Japanese banks have been forced to increase their exposure to non-JGB assets. As chart 5 shows, during the Abenomics era, bank holdings of JGBs have shrunk by 46.4%, while holdings of foreign securities have risen by 76.1% and bank loans have gained 13.8%. However, in absolute terms, this hardly represents the wave of liquidity into risk assets that the BOJ and government had anticipated: at 5.2% of total assets, foreign securities remain a small portion of Japanese bank balance sheets; bank loans continue to shrink as a proportion of bank balance sheets, having declined from 49.0% of assets to 45.9% over the Abe era. A critical factor behind this disappointing flow of liquidity into the real economy and indeed of the failure of the Japanese authorities to come close to achieving their growth and inflation targets during the Abenomics era remains the lack of policy coordination which has seen the stimulatory effect of BOJ’s QQE more than offset by overly tight fiscal policy. (The BOJ’s new policy framework and Jar Jar Binks.) 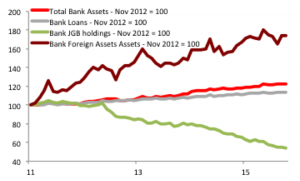 The new policy framework – from monetary expansion to a BOJ taper

Even with the tailwind of QQE, the Japanese authorities have failed to reflate the economy or accelerate the flow of liquidity into risk assets. (FX hedge ratios on overseas asset purchases are little changed during the Abenomics era for instance.) Into a risk-off event, the yield curve targeting policy would create a headwind for Japanese institutions risk appetite and could accelerate JGB strength. BOJ QQE at the targeted JPY80trn a year pace may be inconsistent with an asset allocation into JGBs by Japanese financial institutions. One can easily see the BOJ being in the situation when JGB yields decline back to levels where the positive returns from a steep curve no longer compensate for the negative carry of being long JGBs. Under such a situation, the BOJ would be forced to steepen the curve by lowering the call rate (which it is reluctant to do and which may only provide a temporary re-price as the curve swiftly re-prices) or taper it’s JGB purchases.

For these reasons, the pro-cyclicality of the BOJ’s new policy framework injects additional downside convexity risk into USD/JPY. For now, global and Japanese policy settings and growth and inflation expectations argue for continued JPY weakness, and USD/JPY rising towards 120 over the coming months remains possible. However, the growing risk of a discreet, non-linear correction lower into a risk-off event suggests that investors could consider investing part of their profits in the short-JPY trade in downside protection. Moreover, beyond 115, we would be inclined rotate USD-longs out of JPY and into the EUR or Asian emerging market currencies.