In our recently released strategy note (The Gilt sell-off, mounting UK economic risks and an inflation scare that rhymes) we outlined that the upsurge in UK break-even inflation rates to over 3% had over-stated the likely path of UK inflation. Admittedly, the slump in the GBP will drive import prices higher and could see the Bank of England’s (BOE) 2% inflation target overshot by over 1% within 12-18 months. However, the laggardly nature of wage growth and growing downside risks to the economy will mean this poses more of a threat to household disposable incomes and hence private consumption more than it will spark a second round inflation effect. A steep disinflation if not deflation will follow the import price shock. 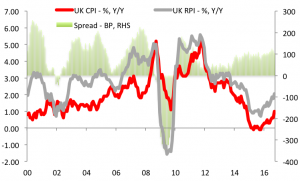 One rejoinder to the view that BE spreads have overshot is that the reference rate for UK Linkers is the RPI rather than the CPI. Due to numerous computational and compositional weaknesses, the RPI substantially overstates the level of inflation as determined by the more robust CPI. This “inflation wedge” currently sees the RPI 104bp above the 1.0% Y/Y rise in the CPI and over the past 5 years has averaged 71bp, which has been the medium-term differential. BOE analysis suggests that the wedge could rise to 1.4pp over the long-term. This questions whether UK BE inflation rates have actually overshot since a 3% RPI may be consistent with a CPI of 2% or lower.

This is a viable criticism. However, there is a strong cyclical component to the UK inflation wedge. One of the reasons why the RPI tends to be higher than the CPI is that it includes measures of housing price trends and mortgage payments. Both of these measures tend to move lower into a UK economic downturn. Chart 1 demonstrated how the CPI wedge turned steeply negative in 2008-2009 when the UK economy went into a deep recession, and then reasserted a positive differential as the recovery matured. Given our growing concerns with respect to the UK economic outlook, we would expect the cyclicality of the inflation wedge to narrow the differential between the CPi and the RPI. Hence, we feel confident in believing that UK BE spreads have over-short the likely path of inflation.